An interesting new book has come to my attention, so I want to share this with you.


Love Notes From Hell
By Roy Nelson
-HOW ONE MAN’S DEMONS TURNED INTO A RECOGNIZED HEALING PROCESS FOR ADDICTION, OBSESSION AND FREEDOM

In “Love Notes From Hell,” Roy explains:
By using examples from his own experiences, as well as those of his private clients, Roy helps the reader understand why so many treatment options are failing and how spiritual truths such as those contained in the Nelson Method™ can produce extra ordinary transformation and freedom from your own personal hell.  Many truly believe that Roy is the last resort for those who cannot stop their self-destructive habits.
About the Author
Roy is known as “the last resort” for those who cannot stop their self-destructive habits.  Living with a violent, alcoholic father drove him to pursue a life of escape by any means possible - until he conceded that his self-imposed hell was killing him.  It was then that he had a profound experience that changed everything.  Over thirty-five years ago Roy “cracked the code” of his own addictive personality. As a result, he lost 120 pounds and overcame a myriad of addictions, as well as depression, panic attacks, and phobias. Based on his personal experience of total freedom, Roy developed the Nelson Method—a plan of spiritual healing that is designed to help people heal from their own personal hell, even when all other approaches have failed.  He and his wife live in Los Angeles, California and continue to help people find freedom through the Nelson Method.
For more information on Roy Nelson and the Nelson Method, please visit:www.roynelsonhealing.com.
“Love Notes From Hell” will be available nationwide in October 2014 atwww.amazon.com and www.roynelsonhealing.com. 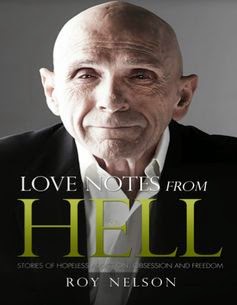 I am leaving Vindale Research, a website that offers to pay you for answering surveys.  You see, I recently spent the better part of an hour on one of their surveys, only to be told when I clicked the 'SUBMIT" button at the end of it that I did not qualify and therefore would not be paid.   (it was only a couple dollars, hardly enough to pay for an hour of my time.)

This particular survey involved reading a complicated legal case and answering questions as if I were on the jury.  I also had to render a verdict, and write in my own words why I reached that verdict and what other information I would like to have.

I have contacted support, had a long conversation with them, and gotten the response that they will not investigate why I was disqualified, and they will not pay me.

So I must recommend that nobody join, and that those who have joined should seriously consider leaving.  As far as I am concerned, the site is a rip-off.
Posted by tuffy777 at 9:01 AM 2 comments: