Milledgeville, June 10, 2019 (GLOBE NEWSWIRE) -- An archaeological dig commences tomorrow, Tuesday, June 11, at Andalusia: Home of Flannery O’Connor at Georgia College in Milledgeville. The excavation could pinpoint the exact location of pens where the famed author kept her flock of more than 40 peacocks.
Female members of that richly-colored pheasant species are referred to as “peafowl.” Historical photographs show peafowl were kept in original pens near O’Connor’s “nail house”—which served as the property’s garage and storage area.

The four-day dig will run through Friday but be in full swing Wednesday and Thursday, June 12-13, said Matthew Davis, director of historic museums.

“We hope to find items that can better illustrate the life of the O’Connor family on the farm,” Davis said. “Opportunities to learn about our past are always exciting, and I look forward to seeing the discoveries that we make and can share with the public, as a result of this work.”

In August 2017, Andalusia Foundation donated the landmark to Georgia College & State University Foundation. The farmhouse was the final home of O’Connor, who graduated in 1945 from the university, then known as Georgia State College for Women. She lived on the property from 1951 until she died of lupus in 1964. During those years—influenced by the farm’s setting—O’Connor wrote the bulk of her literary work.

“As we work towards Andalusia’s restoration, it’s important to have a full understanding of the site’s history,” Davis said. “Finding the location of these historic resources will allow us to fully articulate Andalusia’s history during the time O’Conner’s family lived at the site.”

Southern Research, Historic Preservation Consultants, Inc. of Waverly Hall, Georgia, was chosen to conduct the excavation. Its team helped develop current guidelines for historic preservation on campuses in the University System of Georgia. Co-owner and principal investigator, Dean Wood, has more than 40 years of experience protecting timeworn properties throughout the Southeast. His company has done digs in Milledgeville at several locations, including Georgia’s Old Governor’s Mansion. 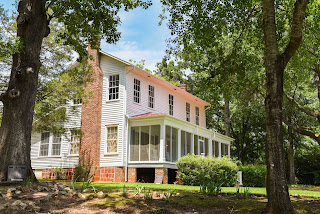 The first stage of intensive survey includes excavation using small shovels. Two archaeologists will test areas to establish potential depths of historic deposits and features. Then, a metal detector survey will be conducted.

Using information from shovel tests and metal detecting, archaeologists will lay out and excavate at least two shallow ground units, where they believe cultural items are present.

Recovered artifacts will be cleaned, identified and stabilized by electrolysis at Southern Research’s labs. A final report of methods used and the significance of artifactual findings—plus, a prediction of the exact location of O’Connor’s peafowl pens—will be submitted to the University of Georgia Laboratory of Archaeology in Athens.

The dig is open to the public. Visitors are encouraged to come watch during Andalusia’s hours of operation: 10 a.m. to 4 p.m. Tuesday through Saturday and 2 to 4 p.m. Sundays. Tours of the farmhouse begin on the hour with the last at 4 p.m. Admission is $7 for adults; $6 for seniors and pre-booked groups; $2 for students; and free for children under 6.