Dr. Tim Ball, one of the first Canadians to hold a Ph.D. in climatology, wrote his doctoral thesis at the University of London (England) using the remarkable records of the Hudson’s Bay Company to reconstruct climate change from 1714 to 1952. He has published numerous articles on climate change and its impact on the human condition. Dr Ball has served on numerous committees at the federal, provincial, and municipal levels on climate, water resources, and environmental issues. He was a professor of climatology at the University of Winnipeg for 28 years. He is currently working as an environmental consultant and public speaker based in Victoria and has written, with Dr Stuart Houston, 18th Century Naturalists on Hudson Bay, a book on the science and climate of the fur trade (McGill-Queens University Press, 2003).

So you would expect Dr. Ball to be right on board with global warming, right? wrong.

Computerized models of the earth’s climate are at the heart of the debate over how public policy should respond to climate change. Global climate models – also called general circulation models – attempt to predict future climatic conditions starting with a set of assumptions about how the climate works and guesses about what a future world might look like in terms of population, energy use, technological development, and so on.

Analysts have pointed out, however, that many of the assumptions used in modeling the climate are of dubious merit, with biases that tend to project catastrophic warming, and have argued that climate models have many limitations that make them unsuitable as the basis for developing public policy.

Dr. Tim Ball discussed the paper The Science isn't Settled, published by the Fraser Institute (www.fraserinstitute.ca/admin/books/files/ScienceIsntSettled.pdf), and examined two major limitations that hinder the usefulness of climate models to those forming public policy.

At least as far back as he 1970s (I recall predictions from the 1950s and 1960s), scientists were predicting an ice age. NOT global warming, but global cooling. As evidence, I present excerpts from this article from TIME magazine, Monday, Jun. 24, 1974 --


In Africa, drought continues for the sixth consecutive year, adding terribly to the toll of famine victims. During 1972 record rains in parts of the U.S., Pakistan and Japan caused some of the worst flooding in centuries. In Canada's wheat belt, a particularly chilly and rainy spring has delayed planting and may well bring a disappointingly small harvest. Rainy Britain, on the other hand, has suffered from uncharacteristic dry spells the past few springs. A series of unusually cold winters has gripped the American Far West, while New England and northern Europe have recently experienced the mildest winters within anyone's recollection.

As they review the bizarre and unpredictable weather pattern of the past several years, a growing number of scientists are beginning to suspect that many seemingly contradictory meteorological fluctuations are actually part of a global climatic upheaval. However widely the weather varies from place to place and time to time, when meteorologists take an average of temperatures around the globe they find that the atmosphere has been growing gradually cooler for the past three decades. The trend shows no indication of reversing. Climatological Cassandras are becoming increasingly apprehensive, for the weather aberrations they are studying may be the harbinger of another ice age.

Telltale signs are everywhere —from the unexpected persistence and thickness of pack ice in the waters around Iceland to the southward migration of a warmth-loving creature like the armadillo from the Midwest.Since the 1940s the mean global temperature has dropped about 2.7° F. Although that figure is at best an estimate, it is supported by other convincing data. When Climatologist George J. Kukla of Columbia University's Lamont-Doherty Geological Observatory and his wife Helena analyzed satellite weather data for the Northern Hemisphere, they found that the area of the ice and snow cover had suddenly increased by 12% in 1971 and the increase has persisted ever since. Areas of Baffin Island in the Canadian Arctic, for example, were once totally free of any snow in summer; now they are covered year round.

Man, too, may be somewhat responsible for the cooling trend. The University of Wisconsin's Reid A. Bryson and other climatologists suggest that dust and other particles released into the atmosphere as a result of farming and fuel burning may be blocking more and more sunlight from reaching and heating the surface of the earth.

Republibot was kind enough to send me a link to this article.

The Fiction Of Climate Science
by Larry Sutton
from Forbes

In 1974, the National Science Board announced: "During the last 20 to 30 years, world temperature has fallen, irregularly at first but more sharply over the last decade. Judging from the record of the past interglacial ages, the present time of high temperatures should be drawing to an end…leading into the next ice age."

Global warming? I think not.

Rather than say it myself, I will let the YouTube video say it for me.

Mauna Loa has been producing a readout which supports Manning's predetermined goal by showing steady growth in atmospheric CO2 concentrations since 1959. This record, highlighted in Al Gore's discredited movie An Inconvenient Truth, is known as the Keeling Curve. A graph of the curve is engraved on a bronze plaque mounted at the entrance to the Observatory’s Keeling Building, 10,000 feet above sea level on the rocky north flank of Mauna Loa. According to the Observatory website: "The undisturbed air, remote location, and minimal influences of vegetation and human activity at MLO are ideal for monitoring constituents in the atmosphere that can cause climate change."

For some reason, they fail to mention the erupting volcano next door.

The article discusses several other observatories that measure atmospheric CO2 downwind from active volcanoes, and even the one in Antarctica has a similar problem:

The South Pole Observatory is just yards away from a power plant which burns jet fuel 365 days a year to provide electricity and heat for Amundsen Station. (Researchers claim that prevailing winds come from the opposite direction.) It is also about 800 miles from Antarctica's Mt. Erebus volcano, which has continuously erupted since 1972. Because the atmosphere's ability to carry water vapor is cut approximately in half by every ten-degree-C drop in temperature, the extremely low temperatures at the South Pole mean that only trace amounts of water vapor are in the atmosphere. CO2 mixes with water vapor in the atmosphere to form H2CO3 (carbonic acid), giving rainfall a slightly acidic pH and washing CO2 from the air. The uniquely dry and cold conditions of the South Pole prevent this from occurring, thus altering the natural atmospheric carbon elimination process and magnifying the effect of CO2 sources. Amundsen Station personnel and emissions from the 12,000-foot Mt. Erebus volcano are also implicated in the 1990s ozone hole scam.

The Canis Major Dwarf Galaxy is the closest galaxy to our Milky Way.

From a Press Release:

". . . stronomers found the main dismembered corpse of the dwarf galaxy in Canis Major and long trails of stars leading back to it. It seems that streams of stars pulled out of the cannibalised Canis Major galaxy not only contribute to the outer reaches of the Milky Way's disk, but may also pass close to the Sun."

Here's a cool photo from 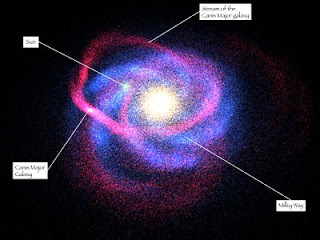 Sagittarius DEG -- Dwarf Ellptical Galaxy -- is the correct designation of the small galaxy that is merging with the Milky Way, to distinguish it from Sagittarius DIG, Dwarf irregular Galaxy. 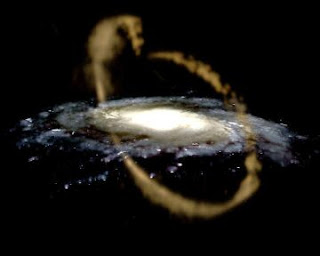 Astronomers have long suspected that the Milky Way Galaxy was formed from smaller galaxies. Moreover, after becoming a relatively large galaxy, it may have continued to acquire a substantial part of its mass by "devouring" smaller galactic companions that moved too close. Apparently confirming that hypothesis was the discovery of a new object in 1994 now commonly referred to as the Sagittarius Dwarf Elliptical Galaxy (SagDEG), found very close to the Milky Way on the opposite side of the Galactic Center from the Solar System (Ibata et al, 1995 and 1994). Not to be confused with the Sagittarius Dwarf Irregular Galaxy (SagDIG), SagDEG is the Milky Way's nearest known neighbor and comprised of mostly old, yellowish stars. Astrophysicist Rosemary Wyse of Johns Hopkins University has estimated that as much as 10 percent of the stars in the Milky Way's halo came from dwarf galaxies like SagDEG, merging with the Milky Way over the past eight billion years or so. (In November 2003, astronomers announced that an even closer galaxy (located 25,000 ly from Sol and 42,000 ly from the galactic center) called the Canis Major dwarf may be losing stars to the Milky Way's disk as well.)

In 1996, a team of astronomers found a stream of stars that were apparently stripped from SagDEG by the Milky Way as a "tidal trail" (Mateo et al, 1996). Extending to the southwest, it can be traced out to 34 degrees from the center of Sagittarius. Although theoretical models predicted the symmetric presence of another stream, extending to the northwest, that could be so long as to completely encircle the Milky Way, this stream was more difficult to find because it would cross the disk of the Milky Way and so be obscured by the dense stars, gas, and dust of the Galactic Center.

The article goes on to say that recent observations have confirmed the theory that the stream of the incoming stars of Sagittarius DEG actually do encircle the Milky Way.

In 2003, some astronomers modeling SagDEG's movements with a full-sky map of red (M) giant stars attributed to the galaxy that were detected through the Two-Micron All Sky Survey (2MASS) speculated that it was once pulled through the Milky Way's disk very close to Sol's current location (Majewski et al, 2003; and Law et al, 2003).

http://www.solstation.com/x-objects/sag-deg.htm
Posted by tuffy777 at 11:25 AM No comments: