Is There Life After Death?

Interview with Anthony Peake, author of Cheating the Ferryman, on BBC radio.

An alternative theory to reincarnation, not involving Heaven, but more about alternate worlds.

The interview is available for the next six days,

He heard the voice of God on the bedside radio

In March 1974, Philip K. Dick (Bladderunner) began hearing the voice of God on his bedside radio.

But the story begins back in 1970, when he received a telephone call from Dr. Timothy Leary, the LSD guru whom President Richard Nixon called "the most dangerous man in America".

Learn how mysterious people who claimed to belong to a super secret government organization terrorized the science fiction author until he left the country, only to return with no money but a head full of ideas for his next novel, A Scanner Darkly.

Learn more on my other blog:

For thousands of years, people have worshiped the planets Venus and Mars, often without knowing it.  Velikovsky had a piece of the truth, as does Richard C. Hoagland.

In ancient times, people were terrified of the planet Mars.  Why?  The planet Venus sometimes passed close to the Earth, but Mars did so more often and with more devastating effects.

Ancient ritualistic magic and blood sacrifice were feeble attempts to stop Mars from passing close to Earth and causing devastating floods, fires and earthquakes.  The long day of Joshua was probably due to a close pass by Mars, as described by Chuck Missler.

Many modern occult practices go back to the dimly seen ancient past, when powerful leaders took advantage of the superstitions of the masses.  Certainly, when the Aztecs ripped out the hearts of their victims, that sacrifice could not stop Mars or Venus from coming near to Earth, but it worked because those planets had already settled into their present orbits.  The temple prostitutes in ancient Sumer were not serving the gods, but rather enriching the warlords.

But in ancient Sumer, there was a real possibility that one of those rogue planets would come close to Earth.

An awesome force must have knocked those planets out of their proper orbits, and they have only recently settled down into their present places in the sky.

Mars must once have been a moon of a much larger planet, a planet that exploded and formed the asteroid belt plus a few other fragments.  Some of those fragments probably got caught up in Jupiter's gravity, while others continued moving outward to form Pluto and the other planetoids and comets in the far distant reaches of our solar system.

Other fragments must have hurtled toward the inner solar system, giving Earth the Moon, while others fell into the sun and were vaporized.   The planet Mercury might be a large fragment that managed to escape destruction.


What was life like for the survivors of that ancient catastrophe?  In my novel Origins, Part One:  Thor's Hammer, I explore the lives of people who take refuge on the prison planet Earth after their home planet is destroyed in an interplanetary war.

What if Richard Hoagland is right? What if we are the Martians?

What if we are the Martians?

What if Mars was once a moon of a larger planet, a planet that exploded and formed the asteroid belt?

What if the survivors of that ancient catastrophe took refuge on Earth?

Read my novel Origins Part One:  Thor's Hammer, which explores what life must have been like for our ancient ancestors, if Richard Hoagland was right. 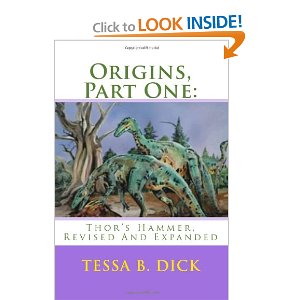 Labels: origins, richard hoagland, we are the martians

Two documents, packaged together.
Two original documents -- Philip K Dick's handwritten note assigning half of the royalties from his novel A Scanner Darkly to me shortly before our marriage in 1973, and our marriage certificate.

These documents refer to me by my maiden name, Leslie Ann Busby.

The marriage certificate is signed by the minister and two witnesses:  my father and one of our neighbors on Quartz Lane in Fullerton.

The sale of these documents will help me keep my home during these hard times.

You can find some of my books on Amazon.