Chapter 2, The Prelude
After about than 35 years, I’ve finally put together some of the pieces of a puzzle that I once thought unsolvable. Why would some vast conspiracy, some ultra-secret organization with international resources, focus their efforts on a little known science fiction writer who was so poverty-stricken that he was forced to apply for government aid to feed his small child? This question occurred to Phil and others many times, but no answer seemed forthcoming. Recently, however, I came across information about Dr. Timothy Leary, with whom Phil had a passing acquaintance.
Dr. Leary spoke to Phil by telephone in 1969, several months before Leary’s conviction for possession of marijuana. President Nixon once called him “the most dangerous man in America”, due to his advocacy for the use of LSD and other psychotropic drugs. When he escaped from prison in 1970, all the resources of the federal government were marshaled to track him down. So that explains why Phil was under surveillance in 1971. He had come to the attention for the authorities because they wanted to put a stop to Leary’s call to “tune in, turn on and drop out”.
Timothy Leary, once the golden child at Harvard University for his work in personality profiling, had become a public enemy, considered more dangerous than the worst mob boss. Phil, in turn, had become a public enemy by association.
Phil’s wife Nancy was hospitalized for an extended period, and the royalties coming in from his books slowed to a trickle and then dried up, so he applied for state aid to ensure that his daughter Isa would have food and medical care. Phil began to notice that cars seemed to be following him when he drove to the grocery store. He wrote it off as paranoia, at first.
When Nancy came home, she seemed distant. Eventually, she left him for a neighbor who happened to be a member of the Black Panthers. To say the least, those circumstances did nothing to assuage Phil’s feelings of persecution. Left alone in a three-bedroom house, Phil began taking in roommates to relieve his feelings of loneliness and help to pay the bills. Gradually, without his noticing it at first, the little tract house in San Rafael, California, became known as a party house and a crash pad. People would come to visit, drink and take drugs, eat Phil’s food and fall asleep on the couch and the floor. Some of those people he knew, and others he did not. Some told him that the police suspected him of being a drug dealer, and that it was bad for his reputation to allow teenagers to hang around. He began dating a 19-year-old girl, and her friends naturally gravitated toward his house.
Most of these people did not read and had no idea what Phil did for a living. They were kids who liked to party, and his house was open to them.
All of these circumstances looked suspicious to any authorities who might notice him. And since he had already come to their attention because of his contact with Timothy Leary, they did notice him.

I've always been fascinated by the little bits of ancient history that you do not find in the textbooks, so I put together the bits and pieces of the past, pointing to the one truth that I know:

Whether you and I believe it or not, certain members of the wealthy and powerful elite do believe that they are descended from the gods.

Epinions - my reviews of products and services

I've been reviewing products and services at Epinions for about ten years, and it's a great way to earn a little honest money.  Please use the link below to read some of my reviews.

You can earn a little, too, by writing reviews of about 600 words about the things that you already have around the house.  That includes books and movies.  It won't make the house payment, but it will give you pocket money.  And you get paid the same for saying that a product is no good, as you would for saying that it's great.

They do not have a referral program, so I do not get anything if you join.  However, my income will be boosted a little bit if you read some of my reviews.

These items are now going up on eBay, along with other memorabilia. 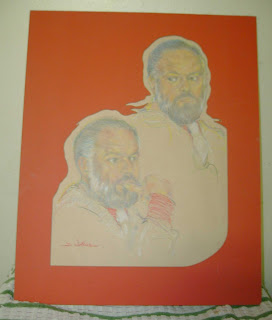 I really need the $, to keep my utilities on and keep my house. I have nowhere to go, and no car to take me there.  I will consider all serious offers.

Here's an image of Philip K. Dick's wristwatch, the one that he wore to the convention in Metz, France.  It works, but it does need a new battery. 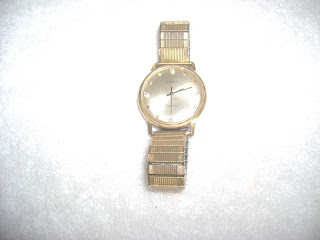 Please see the additional posts below for more items.

Thanks to Henry and Lesley, my water bill is covered.  Thank you so much!
But there's still the pesky house payment coming up on the first of October.
~~~
Posted by tuffy777 at 8:09 PM No comments:

If anybody wants to be an angel and help me, my immediate goal is to scrape up $100 by Monday, to keep my water service turned on.

You can email me or send Paypal at

I will keep track of any contributions and pay them all back as soon as I get on my feet.

I have lost almost everything, and now I am losing the last of it.  In order to stay in my home a couple months longer, I am selling everything that I have left.  This handwritten document was Phil's way of making sure that I had my fair share of A Scanner Darkly, if anything happened to him. Phil wrote it by hand on a folded sheet of typing paper, shortly before we got married and I changed my name to Tessa Busby Dick. 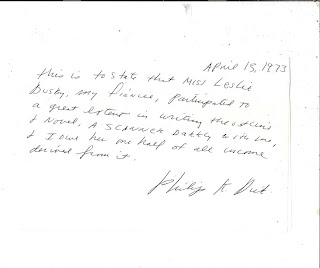 Since this document is no longer of any use to me, and I'm about to be kicked out on to the street, it is for sale to the highest bidder.  Minimum:  $600.  It is the original assignment of royalties, with my husband Philip K. Dick's signature.  It relates to the novel A Scanner Darkly and the UBIK screenplay. 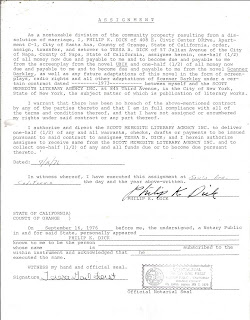 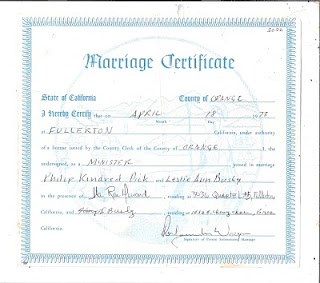 Recently, a VHS tape of The Wolf Man (1941) came into my hands, so of course I had to watch it.  Several times.  How could I pass up the chance to see Lon Chaney Jr., Claude Raines and Ralph Bellamy working together?  Not to mention some beautiful ladies, plus the incomparable Bela Lugosi and Maria Ouspenskaya!

The werewolf story that used to strike terror into me when I was a child still terrifies me, but in a different way.  I've come to see it as a morality tale.  The true horror lies in the wolf man's inner struggle with his own conscience.

The black-and-white cinematography is so masterful that I barely noticed it until the third viewing, when I was consciously looking at it for the purposes of my review.  The same principle applies to the music, which is seamlessly concordant with the story.

Please take a minute and read my review at Epinions:


Even a man who is pure in heart

Redstone - book review in a hurry

When I saw this title, Redstone, my first thought was rockets.  Nope.  The topic of this book is not science and not even science fiction, but it is a tale full of wonder.  It's about a lost Indian tribe (Native American, that is), and an adventurer who is befriended by a cougar named Kitten.

No young swashbuckler, our hero is an old man who has lost his job, his wife and his health.  He decides to take matters into his own hands, by the tail or whatever cliche you prefer, and he finds a hidden valley where his life begins anew.

Book review - I Think I Am Philip K. Dick, by Laurence A. Rickels

I have mixed feelings about this book, but I do recommend it for those with a deep interest in the work of Philip K. Dick.

Please follow the link to read my book review - I Think I Am Philip K. Dick, by Laurence A. Rickels