I just hate to admit it when I have been wrong, but here goes:

On several occasions, I have said that there is nothing special about 2012. I was wrong. The Mayan calendar makers did know something that we didn't know. Until quite recently, that is.

The year 2012 is when our solar system officially becomes, at least in the minds of those ancient calendar makers, officially a part of the Milky Way galaxy.

You see, scientists have found an explanation for why the Milky Way appears at an angle in the night sky. If we were part of the Milky Way Galaxy, then the dense band of stars that we call the Milky Way ought to appear as a horizontal band of bright stars stretching from east to west, cutting the night sky neatly in half. We should be orbiting the galactic center in the flattened disk where the stars are most densely packed -- we should be oriented to the galaxy's ecliptic. We are not. Instead our star, the Sun, wobbles up and down across the ecliptic in a cycle that lasts roughly 26,000 years.

This is because we are part of the Sagittarius dwarf galaxy, and not part of the Milky Way.

We can't see the Sagittarius dwarf galaxy, but with infrared photography, we can see that the Milky Way is stretching out the tiny dwarf and eating it.

Water found on the Moon

Water found on the Moon

The discovery came out of a mission a month ago in which a
satellite hit into a crater near the lunar south pole.

why am I not surprised?

Dangers of mercury in vaccines

For many decades, the FDA has known about the neurotoxic effects of thimersosal. A review of internal documents from Eli Lilly, the original inventor of ethylmercury in the 1920s, reveals that only one study has ever been performed to investigate thimerosal’s safety in humans and it was “woefully inadequate.” During the actual Committee hearings, Rep. Burton remarked, “You mean to tell me since 1929 we’ve been using thimerosal and the only test you know of is the one that was done in 1929, and every one of those people got meningitis and died?”[5]

The EPA tells s not to eat a can of tuna fish because it contains mercury, but the FDA and the CDC tell us to let them inject mercury into us. They claim that it's perfectly safe!
~~~
Posted by tuffy777 at 12:09 PM 4 comments:

As a writer of science fiction, I have an intense interest in science, especially as it affects real people. One of the most alarming trends in science, in my opinion, is to panic over unproven theories of global disaster. Global warming presents a huge threat to humanity, not because the Earth is warming but because it is not warming. In fact, many prominent scientists state -- and have been stating since the 1950s -- that we are entering a global ice age.

While alarmists change their cry of global warming to global climate change, the real situation on the ground reveals that they do not know what they are talking about. The global warming alarmists predicated that average global temperatures would rise over the past ten years, but the temperatures have actually fallen.

As physicist David Douglass said, “If the facts are contrary to any predictions, then the hypothesis is wrong no matter how appealing.”

Many people pointed to facts contradicting the “appealing” hypothesis but were ignored or marginalized for several reasons. These included; apparent support from rising global temperatures between 1980 and 1998; evidence too technical for most people; effective personal attacks on skeptics; Gore’s slick propaganda movie An Inconvenient Truth despite 35 scientific errors; and the mainstream media was ignorant of the science and biased.

Go to the right hand column and scroll down about halfway for the story,
"Current Global Temperatures Impossible According to IPCC ‘Science’"
By Timothy Ball, Canada Free Press

Or use this link to the same article, for a page that loads much more slowly

I just love this kind of science story, a little over the edge, but still making the mainstream news. 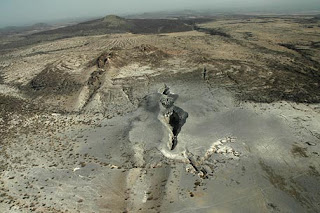 The African and Arabian plates meet in the remote Afar desert of Northern Ethiopia and have been spreading apart in a rifting process — at a speed of less than 1 inch per year — for the past 30 million years. This rifting formed the 186-mile Afar depression and the Red Sea. The thinking is that the Red Sea will eventually pour into the new sea in a million years or so. The new ocean would connect to the Red Sea and the Gulf of Aden, an arm of the Arabian Sea between Yemen on the Arabian Peninsula and Somalia in eastern Africa.