I got this press release that is of interest to authors.

Publicist of the Year Leads Awareness Campaign to "Check Your Books"


Agoura Hills, CA, March 31, 2016 (Newswire.com) - ​​​​​​​​​​​​​​​​​Publicist of the Year, author and advocate Rhonda Rees is orchestrating a campaign to alert authors and publishers to “check their books” to correspond with World Book and Copyright Day, on April 23, 2016.
She is asking that during the month of April they run Google, Bing, or other searches to see whether or not their work is compromised by being offered for “free” without their knowledge or permission.  She would like authors and publishers to plug in the title of their book, or books, the author’s name, and the words ‘free downloads’ to spot what comes up.
This is a subject that Rees knows about first-hand.  Her US copyrighted, trademarked, registered and award-winning book, Profit and Prosper with Public Relations®:  Insider Secrets to Make You a Success was being offered as a free download on several sites without her consent.  http://www.amazon.com/Profit-Prosper-Public-Relations-Rhonda/dp/0982223501
Rees isn’t the only one that this situation is happening to.  Thousands of other unsuspecting authors across the globe are also left vulnerable to unscrupulous Internet thieves.
According to Rees, “It’s not just the famous recording artists or celebrities that are being ripped-off anymore.  Instead, online book piracy is having an impact on the average author in a very big way.”
According to the Association of American Publishers, the publishing industry as a whole has lost $80 to $100 million dollars to online piracy annually.  From 2009 to 2013, the number of e-book Internet piracy alerts that the Authors Guild of America received from their membership had increased by 300%.  During 2014, that number doubled.   In 2016, these numbers are expected to go much higher.
For the past couple of years Rees has been working tirelessly to help bring this little-known topic to public attention.  The Bulldog Reporter publication honored her with their Publicist of the Year Gold Award in their Stars of PR competition for her efforts. https://www.bulldogreporter.com/creative-persistent-campaign-to-gain-attention-for-widespread-online-book-piracy-crisis-earns-rhonda-rees-publicist-of-the-year-and-a-stars-of-pr-gold-award/ In addition, she was also named Publicist of the Year by the Book Publicists of Southern California, winning their IRWIN Award (Industry Recognition of Writers in the News.)  https://www.youtube.com/watch?v=KPrATPtRwoQ
As an author, publicist and publisher, Rees has lent her voice by appearing in the media and online, and by contributing feature articles, such as in IP Watchdog.com:http://www.ipwatchdog.com/2016/03/10/crusade-against-online-piracy/id=66902/.  Her aim is to educate the public, and to open up a dialogue between authors and publishers, organizations, policy makers and law enforcement.
She is now asking for authors and publishers to run searches to see whether or not their work is being pirated.  Rees offers important suggestions and tips, and outlines what they can do should they find themselves in this tough situation.   Listen to her Author U podcast: https://player.fm/series/author-u-your-guide-to-book-publishing-podcasts/book-piracy-how-to-discover-and-how-to-fix-show-02-25-2016
After World Book and Copyright Day this April 23, 2016, she will continue her fight against the online piracy of books.   Rees has made contact with the Global Intellectual Property (IP) Center, a division of the US Chamber of Commerce, the Authors Guild of America, the Counterfeit Report Company, the Piracy Trace Business, and numerous organizations such as IBPA (Independent Book Publishers Association), SPAWN (Small Publishers Artists and Writers Network), and BPSC (Book Publicists of Southern California.)
World Book and Copyright Day is an annual event sponsored by UNESCO (United Nations Educational, Scientific and Cultural Organization) to help promote reading, publishing and copyright issues.  It is observed in over 100 countries, from private businesses, schools and voluntary organizations that come together to pay tribute to authors and books.  The April 23, date is the anniversary of the birth and death of William Shakespeare, and the birth or death date of other well-known authors such as Miguel de Cervantes, Maurice Druon, and Halldór Laxness.
Rhonda Rees is available for interview.  For further information, contact Rhonda Rees via her website: www.rhondareespr.com.  You can also follow her on Facebook,LinkedIn or Twitter @ReesRhonda.
Posted by tuffy777 at 7:35 AM No comments:

Time to clean out the shed

Now that the rain has gone away for at least a week, it's time to empty out the shed, sweep and bug bomb it, and put everything back. Of course, putting things back means sorting, tossing, donating and selling as much as possible. Since work assignments have been anything but steady in recent months, selling will be my top priority.

The mess from last year, which you see in the photo below, is now in the storage shed, and not much better organized. Every time I get started on the job, something comes up and I have to leave it. Sometimes it's an unexpected rainstorm, but usually it's something else that might not be as important, but which is much more urgent.

A couple years ago, it was a broken leg. Last year it was a badly sprained wrist and bruised elbow. This year I hope to get the job done without any such interruption. I'm still incredibly clumsy, but if I take it slowly and get some help from a nice neighbor, I think it will get done.

I've been clumsy and accident-prone ever since I cracked my skull a few years back. I had a concussion, and my brain swelled up. It's taken lots of time and effort to find ways to compensate, but I'm getting there. I still have no good sense of time, and words often fail me, but I have had some slight improvement. I'm afraid my eyesight will never quite be the same, but I have eyeglasses now.

Life is good, for the most part. I've been better, but I've also been worse. 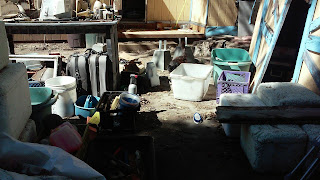 Do publishers have the same rights as broadcasters?

In Europe, publishers do not have the same rights as video and audio media when it comes to copyright law. That situation might be abut to change.

I got the following press release this morning:

Publishers are not currently acknowledged in EU law as rightsholders. The expected change would put press publishers’ rights on par with other content producers such as broadcasters, film producers and phonogram producers with a related right that would afford publishers more licensing and negotiation opportunities.
Importantly, a new publisher’s right:
EPC Executive Director Angela Mills Wade said: “It is high time that press publishers were treated in law the same as all other content producers. In this digital age, licensing is complex, particularly in the context of 24/7 content production and distribution over multiple platforms.
“We welcome the European Commission’s support for an independent, free press in Europe and for understanding our urgent need for new, digital-appropriate legal rights in line with other content producers. A professional press publisher is subject to significant costs for the employment of, and legal protection of, highly-skilled journalists; for the financing, production and management of print and online editions, and for being legally answerable for the accuracy and quality of their content. A new publisher’s right would go some way to protecting that investment and supporting innovation in the sector.”
Note to Editors:  National laws have been introduced in Germany and Spain to address specific issues regarding the exploitation of publishers' content by third parties. Any European solution for a publisher's right should be applied without prejudice to such national laws, and must be forward looking, neutral, sufficientlybroad and flexible to be future proof for the years to come.  It must set an overall high standard of protection of freedom of the press, by recognising that a press publication is a creative endeavour and without this incentive to invest, it would not exist.
Access the Frequently Asked Questions here.
For further information and comment, please contact
Heidi Lambert on Tel: +44 7932 141 291
Angela Mills Wade on Tel: +44 1865 310 732 or
@epc_press
ENDS