The myth that the poor don't pay taxes

In the course of political debate, it is often said that the poor do not pay taxes. That simply is not true. Perhaps 47 percent of Americans do not pay income taxes, or get refunds at the end of the year, but everybody pays taxes. Every time you buy something, you pay taxes. Even when you buy food items that do not have sales tax added, the price includes the taxes paid by the store, the farmer and the distributor. And if you drink alcohol or smoke cigarettes, you pay huge taxes. Every time you buy a car or register a vehicle or put gas in the tank, you pay taxes. Whenever you pay rent or make a house payment, you pay property taxes for yourself or the landlord. Even if you have enough deductions to bring your income taxes to zero, you still pay for Social Security, Medicare and Disability. Those are taxes. If you have a private retirement plan, that money will be taxed, sooner or later. Taxes hurt everybody, especially the poor. Raising taxes on the "wealthy", which seems to mean an income of $250 thousand a year, hurts everybody because the costs of those taxes are passed down as surely as rain falls from the sky. Let's talk about what an income of $250 thousand means. It means that you are not a millionaire, that maybe you can send your kids to college, that you can make your house payments unless you foolishly bought too much of a house, that you don't have the wolf at the door every month. It does not make you wealthy. And in this economy, you could lose your job any day, so you had better have some savings. Let's talk about savings. The banks pay less than one percent on savings, which doesn't even come near to meeting inflation. Other investments are risky, and they don't pay that much more. Most mortgages and automobile loans are nowhere near the lowest rate, and many are around ten percent or more. Credit cards can charge as much as 35 percent interest. No, maybe poor people do not pay income taxes, but they do pay somebody else's income taxes every time they buy something or pay their rent. And God save people who have debt! Everybody pays taxes, and everybody is hurt by taxes. ~~~
Posted by tuffy777 at 10:21 AM No comments:

Get Origins while you can; it's about to go out of print

Origins Part One: Thor’s Hammer is about to go out of print, to make way for the expanded epic tale, Fallen Angels. The story follows the survivors of interplanetary war as they struggle to rebuild civilization on a hostile planet where giant beasts roam through mountains, jungles and deserts. The prison planet Gaea, having survived the planet-destroying doomsday weapon, offers meager refuge for the people who fled their shattered home world. In the midst of their efforts to survive, a new religion is born. Get it while you can, under $10 on Amazon! http://www.amazon.com/Origins-Part-One-Revised-Expanded/dp/1440459673/ref=sr_1_1?s=books&ie=UTF8&qid=1347640187&sr=1-1&keywords=tessa+dick+origins "Origins is good stuff, real science fiction, unlike most of the bogus SF on the current market. . . . I would say you not only have an alternate universe good for a sequel or two, but for a long series of novels and short stories. Many a Grand Master has based a whole career on one or two private universes.” ~~ Ray Nelson (co-author of Philip K. Dick’s The Ganymede Takeover)
Posted by tuffy777 at 9:33 AM 2 comments:

Last Saturday the Crestline Lioness hosted a barbecue for our sponsoring club Big Bear Lions, and a good time was had by all. This is our annual reward to all our members for the volunteer work that we do all year. It’s always a welcome treat and a chance to get together and socialize for an afternoon. Our barbecue was made especially flavorful this year because McCormick sent us a free package of grill spices and seasonings. I requested the kit through Crowdtap, a social web site where you can earn points and trade them in for cash. I was thrilled when McCormick selected me as one of the lucky few who received the kit. The kit includes an envelope of Spiced Brandy and Herb Marinade, which made our chicken tender, moist and tasty. We also received an envelope of Memphis PIT BBQ Rub, which our chef Ray used on the short ribs. We got a shaker of Grill Mates Molasses Bacon and a shaker of Montreal Steak spices, which Ray used on the steaks after asking people which flavor they wanted. The bottle of Brown Sugar Bourbon BBQ Sauce got passed around among all the tables, and it was quite empty when we were finished eating. Ray insisted upon cooking the meat, and he owns the grill, so there was no argument. He refused to wear the apron that McCormick provided in the kit, so I’ll have to model it for a photo. We also got a little booklet with some recipes and the url for the web site where we could get more recipes. I’ve been a member of Crestline Lioness since 2005, and I’ve been a board member for the past five years. Lioness is part of Lions International, the world’s largest service organization. We conduct a variety of fundraising activities throughout the year, including yard sales, opportunity drawings, White Cane Days and much more. We support a variety of local and national charities, including City of Hope and Guide Dogs for the blind, and our main focus is on preserving sight. We are especially proud of our annual project of building a float and entering it in the Rose Parade in Pasadena on New Year’s Day. So when we finally get a chance to relax and have a day without work, we really enjoy the barbecue. Everybody brings some kind of side dish, but the centerpiece is always Ray’s grill with burgers, hot dogs, ribs, steak and chicken sending delicious aromas our way. Between the Lions and Lioness, we had about 50 people. McCormick made our party even tastier than ever this year. ~~~ 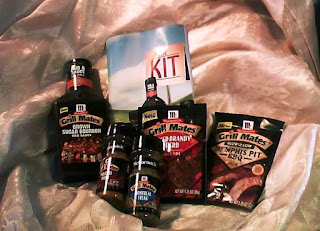 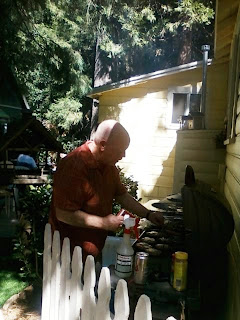 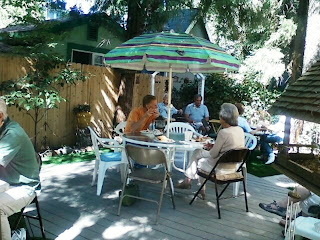 Coming soon, and with great cover art by Nick Buchanan! ~~~ 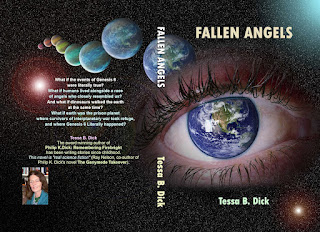 Kitty Cornered: How Frannie and Five Other Incorrigible Cats Seized Control of Our House and Made It Their Home by Bob Tarte
My rating: 5 of 5 stars

While pawing out treats to my furry friends, I quote the oft-repeated line in Kitty Cornered (after telling a cat no to the demand for treats), "while wiping the cat treat dust off my hands".

It's always difficult, and often impawssible to refuse a cat anything. They're purrsistent.

Cats rule my life, but at least I can point to Bob Tarte as a total cat slave, while I still manage to resist some of the more unreasonable demands from my furry task-masters.

This book is hilarious most of the time, sad at times and a great read.

It's easy to read, so I could have plowed through it in one evening, but I want to savor every delicious word.

My fellow crustaceans, We face one of the most serious problems in the history of civilization, and our government is covering it up. I speak about alien invasion by creatures from the sky. You may laugh, but this invasion is real. We find almost daily evidence of lobster mutilation and crab abduction, yet the government continues to insist that aliens do not exist, and besides, it would take them millions of years to get here, even if they did exist.  They are simply burying their heads in the sand and ignoring the vast mountains of evidence for alien invasion.

Hundreds of sightings of strange metal craft hovering above come into my hotline every month. Nobody knows what kind of propulsion system these craft employ, but they do perform amazing hydrodynamic maneuvers before our very eyes. We could never achieve such stunts, and even if we did, our pilots would surely die from being tossed around inside the ship.

We even have some photographs of these strange aerial craft, admittedly out of focus, but clearly showing metallic craft of roughly ovoid shape, one end being flat with fan-shaped thrusters and the other end being more narrow and pointed.

Those who have encountered the inhabitants of these craft and managed to return report that the aliens have pink skin, or sometimes brown skin, and that they lack any sort of exoskeleton. Instead their bodies are covered with soft, flowing substances which must be the vestigial remnants of ancestral exoskeletons. These substances come in a variety of colors and patterns, suggesting that the aliens belong to separate communities, if not separate species. They must have evolved to carry their skeletons inside their soft bodies, although our scientists can see no evolutionary advantage to s uch a mutation.

These evil aliens invade our world on a daily basis, abducting our citizens and the fish who share these waters with us. In some cases, a citizen loses a claw or a bit of skin but otherwise escapes the predation engaged in by these evil invaders.

We must demand that the government release all information about this phenomenon, and that our defensive forces put a stop to the abduction of fish and crustaceans. ~~~
Posted by tuffy777 at 4:29 PM 2 comments: