Where I live, I am  not allowed to have a rain barrel. If I were to save some of the rain that falls on my land, I would be subject to thousands of dollars in fines and possible jail time. If I were to dig a well, that would also be a crime. The water that falls from the sky and pools up underground supposedly belongs to our local water utility, but it is being sold off to a huge foreign corporation. That issue has grown to  immense proportions in the midst of a five-year drought.

Local, state and federal authorities in the U.S. have engaged in a pattern of selling water rights for a tiny fraction of what they are worth. The buyer, Nestle, is a foreign corporation with outlets all over the world. They take water from anywhere they can get it, bottle it and sell it back to the public at high prices. Meanwhile, wells and springs are going dry, especially in drought-stricken areas. Moreover, Nestle takes millions of gallons of water above and beyond what their permits allow.

Boycotting Nestle as part of a grass roots effort has proven difficult and sometime impossible because Nestle owns such a wide variety of products, mostly processed foods. Pressure on government agencies has proven more effective in the fight to keep the water rights that properly belong to the public and should not be sold to anyone under any circumstances.

Here's a copy of the email that I received early this morning:


While we were fighting Nestlé's in Michigan last year, we received some great news that we have yet to celebrate -- you helped secure a win against Nestlé in Oregon!
Nestlé’s had plans to pump fresh water out of Cascade Locks, Oregon to bottle and sell for massive profits -- but it fell through after a nine-year battle with local activists. 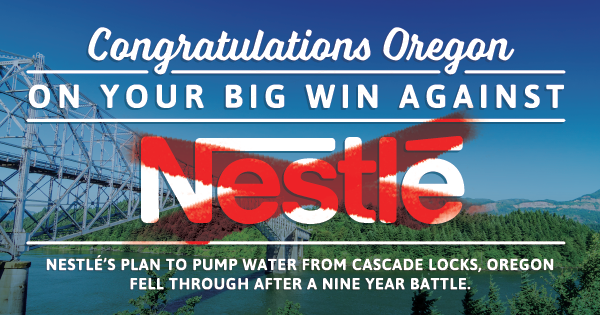 Bowing to the pressure of the Confederated Tribes of Warm Springs, local residents, and thousands of SumOfUs members like you, Governor Kate Brown ordered state officials in October to stop an exchange of water rights that Nestlé needed to seal the deal.
It took major community power to stop Nestlé’s water grab, which would have had the brand drain some of Oregon’s cleanest water for only one cent per 40 gallons. Then, it would sell the same water back to the public for $2.63 per gallon -- a literal steal.
It didn’t matter that Oregon was facing a devastating five-year drought: Nestlé’s plan was about profit and nothing more -- never mind Native American treaty rights or local access to cheap, clean water. But community members and activists wouldn’t let Nestlé rob them without a fight. In May 2016, a massive voter outreach campaign passed a Hood River County measure to ban large water bottling operations like Nestlé’s plan.
Governor Brown’s notice is the result of years of local leadership and community activism. Which means this isn’t a victory just for Cascade Locks or Oregon -- it’s a win for all communities defending their local water rights in the face of corporate greed.
Together, we showed big corporations like Nestlé that even small communities like Cascade Locks won’t bow to corporate profiteering. Now, Nestlé has closed its offices in offices in Cascade Locks and will have to look elsewhere to practice their predatory business model. With your help, we’ll be ready to continue the fight wherever they end up next.
Thanks for all that you do,
Angus, Emma, Amelia and the team at SumOfUs
P.S. Want to help us keep up the fight for local water rights? You can https://act.sumofus.org/go/396156?t=2&akid=39589%2E7005551%2E_PtPc_ rel="noopener">make a donation here to keep us strong and ready to leap into action. Thank you!