I want this book; I need this book! Whether you remember 1969 or you only read about it, this book will inspire you. 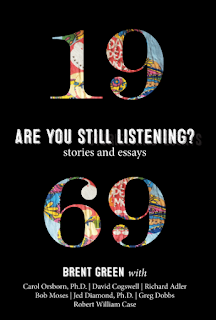 More than a Moon Shot, 1969 Changed the Nation

DENVER, July 18, 2019 (GLOBE NEWSWIRE) --The final year of a tumultuous decade, 1969 upended American culture and shattered domestic tranquility. On the 50th anniversary of that electrifying year, eight eminent authors, journalists and political commentators share their coming-of-age memories, political critiques and lessons learned in a new book, 1969: Are You Still Listening?

Six of the authors will attend a book launch at the BookBar, 4280 Tennyson Street in Denver, 7-9pm on July 20, exactly 50 years after Apollo 11 touched down on the Moon.

“1969 was extraordinary and galvanizing,” said Green. “From Apollo 11 to Woodstock, from Vietnam to The Beatles, indelible lessons from 50 years ago impact our national consciousness and priorities today.”

One question reverberates throughout this book, are you still listening?, inspires readers to think about the nation’s social and political progress 50 years later. How do we define national unity today? Does discord linger from 50 years ago? Do we sense progress toward the goals of that decade?

For those who experienced 1969 firsthand, this book stirs memories and invites reflection. For those born later, the book reveals truths about a rebellious time and an engaged generation that proclaimed a new vision for America.

The book is available from BookBar in Denver in paperback, as well as through online retailers, including Amazon and Barnes & Noble. Purchase here through Amazon.